The Russian Olive tree, as opposed to the native American silverberry, is considered a highly invasive species in some parts of the United States and Canada.

The latin name of this tree is Elaeagnus angustifolia and although it looks very similar to the common olive tree,  they belong to different plant families. Getting rid of Russian olive is labor-intensive but quite easy.

This short tree is actually native to central Asia and Eastern Europe. Reports of its use date back to ancient Persia and India, since edible Russian olive fruits were harvested for oil.

This hardy and vigorous plant spread to many parts of Europe, and until today, Russian olive is used there as an ornamental and useful shrub.

The many qualities of Russian olive set the stage for its introduction in North America: a fast-growing, resilient plant was needed to stave off erosion. In the early XXth century, horticulture stores imported Russian olive and sold it for customers. It helped mark property edges, stabilize river banks, provide melliferous flowers for bees and serve as wind-resistant ornamental hedges.

Russian olive then started spreading and overcrowding native vegetation. The very reasons for which it was imported led to an imbalance in local vegetation. Upcoming generations are now learning to control Russian olive, truly a force unleashed by their forefathers.

Russian olive is hardy down to -40°F (-40°C)! It also survives periods of drought and warm to hot temperatures too. It is an extremely vigorous tree that doesn’t have any natural competitors.

To sum it up, Russian olive:

Additionally, Russian olive berries are prized by many bird species who eat them throughout the winter. Birds then expel the seeds near and far, and these germinate early and grow fast. One single fruit-bearing shrub can thus spread over vast distances.

How does Russian olive impact the local environment? 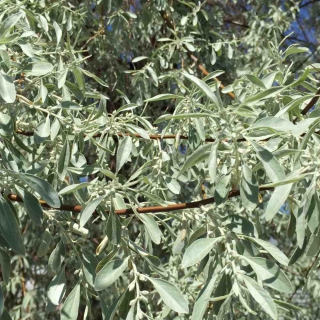 Local fauna and flora are affected by Russian olive as it spreads. This fast-growing plant crowds vegetation out and native plants have trouble germinating, growing, and spreading their own seeds.

Whenever a particularly severe frost spell or dry spell kills native plants off, this hardy and drought-resistant plant bounces back much faster.

Also, Russian olive tends to alter nitrogen reserves in the soil, fixating it in the roots and wood. This reduces the amounts of nutrients available for other plants who often can’t compete with the newcomer.

Russian olive has been shown to outgrow and crowd out native willows, black cottonwood, poplar, elm, and even other invasive species such as saltcedar (also called tamarisk) and more.

In most cases, Russian olive grows dense and lush and keeps other seeds from germinating under it. Since the canopy of native species are more sparse and let the sunlight through, the following cycle develops:

Native trees are only left with perilous and unstable places to germinate like riverbanks and temporary islands within the riverflow.

Within a couple decades, the flora of an entire area can be replaced.

What makes dealing with this plant quite difficult is that it’s also very appealing: the fruits are useful and the fragrance is nice, so it’s difficult to raise awareness about the invasiveness of Russian olive.

Moreover, getting rid of Russian olive is a bane because of its thorns and the vigorous growing back. Even persons who understand the issue don’t easily engage into the work-intensive labor required.

But it actually isn’t so difficult to reduce Russian olive infestations once your mind is set to it.

In both the United States and Canada, local governments where the plant has become invasive have added Russian olive to their noxious weed list. The local Department of Agriculture can inform you on whether your area is subject to restrictions on growing Russian olive.

Possible restrictions can be that:

Usually, local ordinances and governments can support taking action through:

How to stop invasive Russian olive

As said earlier, it’s quite labor-intensive to wipe out Russian olive trees over a wide area. However, it is possible, and the recommended method to kill Russian olive without endangering native plants is the cut stump method.

Remember that if you don’t apply the herbicide, the Russian olive will grow back even more vigorous than before. High-strength vinegar will do the trick.

A few tips on how to make weeding out Russian olive easy:

Other weed removal solutions are ineffective against Russian olive, so don’t try to ignite fires, spray herbicide on vast areas, or simply cutting without using herbicide.

Since Russian olive can be propagated through layering, don’t keep cut branches laying around in moist, fertile soil: some might sprout again!

Russian olive trees are beautiful shrubs, and their name comes from their native region – Southern Russia – and their resemblance to…