Photinia stand out with their scarlet and red-colored leaves.

Planting, pruning and caring for them are steps that help enhance blooming and growth of your Photinia.

Photinia love sun, are hardy (down to 5°F (-15°C)) but also need a lot of water, especially in summer when it is hot and dry.

It is the best season to plant. Photinia are best planted in fall to promote root development.

The best time is November; however, you can plant as early as September and as late as December. Just make sure you’re avoiding freezing days.

Avoid planting during the rest of winter.

Planting in spring and summer

Photinia can be planted in spring and even in summer if purchased in pots.

In that case, water regularly because the shrubs’ needs are higher when not in fall and winter. 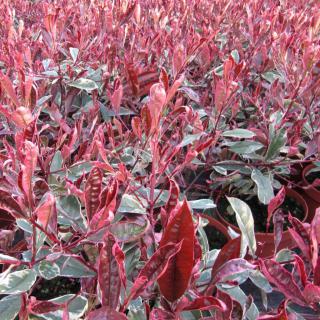 It is possible to propagate your own Photinia through cuttings in summer.

The most famous variety is Photinia ‘Red Robin’.

Pruning and caring for Photinia

Photinia are easy shrubs to care for, especially when well settled in.

Once is after spring blooming and then again after fall growth so that the shrub can be balanced or its size reduced.

It is also possible to prune ‘Red Robin’ Photinia at the end of winter. Pruning at this particular time will spur the growing of red leaves, but it may impair blooming.

Photinia can be shaped freely. You might see some shaped into as cones, balls, or columns…

Note: Photinia will keep growing if not pruned. It can reach heights of up to 20 feet (6 meters). In this respect, it’s similar to cherry laurel.

Adding all-purpose fertilizer in spring will boost growth and make the leafage magnificent.

Diseases, pests, and problems with Photinia

Although Photinia is very resilient and won’t often get diseased, sometimes the following may occur. 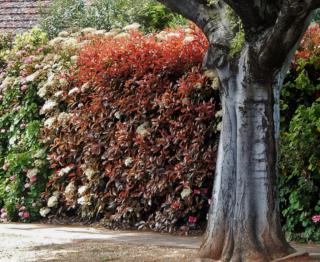 If you have a photinia not bearing flowers, there are usually two reasons to this. Sometimes both are at cause. 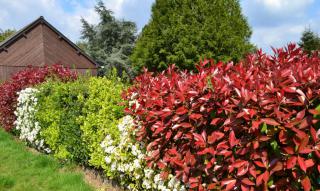 Photinia are shrubs that were hybridized by man and are the result of crossing two different species.

Developed in New Zealand, they were introduced to the West around 25 years ago.

The red-leaved shrub often appears as ornamental shrubs, in beds and in hedges. However, you can also plant it as a standalone.

Their main feature is that leaves are consistently of two colors: deep red for young leaves that slowly turn green as they mature.

They make your hedges and shrub beds stand out with that touch of color.

Abundant leaves quickly make the shrub opaque, which makes it one of the most commonly planted evergreen shrubs in hedges.

This magnificent shrub fits perfectly into any hedge and combines very will with many other species.

Photinia flowers are a great source of nectar and pollen for bees, plant one as a standalone to attract beneficial insects to your garden! Be careful to only prune your photinia after it flowers, in Spring.

Plum tree, how to have great plums