Home » Gardening » Treating diseases and pests » Transplant shock, what it is and how to help your plant survive

Transplant shock is a combination of three factors. Upon moving a tree or plant, it undergoes:

Each of these factors contribute to transplant shock.

Let’s take a look at what transplant shock symptoms are, and the three challenges a plant faces: physical damage, downsizing, and new environment.

A plant that was newly dug up and moved from one place to the another may show signs of :

This is called transplant shock.

For plants and herbs purchased in pots such as lettuce, coriander and parsley, transplant shock can also trigger bolting and going to seed.

When does transplant shock occur?

Transplant shock may occur when:

It also applies to newly purchased houseplants. These leave the optimized environment of a nursery for a completely different setting: your own house!

Can transplant shock occur without moving the plant?

Actually, although not related directly to transplantation, very similar shock can occur in plants.

New buildings or removal of nearby constructions

This can also happen if a large tree is felled. In forestry, sunburn frequently occurs if clear-cuts are performed with a few trees left behind in full sun.

Moving a plant cannot be performed without some degree of transplant damage to the plant. Roots, branches and leafage are all affected.

Roots suffer most, and branches are often wounded, too. This is typically caused by cutting roots with the spade, pruning, breakage, parts of the plant dying off due to mishandling, transportation and such.

When roots are exposed to the air, tiny invisible rootlets dry up and die off. Damage starts even within the first minute!

Being goal-oriented is good, but being careful is good, too! 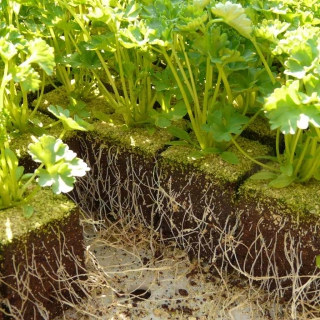 A plant that has been transplanted from the where it used to grow in the ground typically loses half or more of its root system and production system: leaves, branches, etc.

Pruning branches is as important as handling roots

For a transplant to succeed, remove branches and leaves to compensate for loss of roots.

The plant had developed its root system to meet increased circulation of sap, water and nutrients as it grew. All of a sudden, the vessels that channel all these aren’t adapted anymore. Their size isn’t optimized as it used to be. It costs the plant more to shift nutrients around than it used to.

This is the main logic behind the practice of evening out what is removed. If half the root system is lost in the transplant, then it’s important to reduce leafage by half as well.

Also, remember that the bulk of the “active” roots are around the circumference. Roots around the trunk are still good, but usually they’ve already depleted the soil around them and aren’t as important. When transplanting, they’ll have to start getting to work again, which takes a while!

In the long run, the most important factor is the change in growing environment. When a plant is displaced, the following usually change radically:

A plant, as it grows, responds intimately to its environment, to “bloom where it is planted“. The shock of change can often be overcome, but in some cases proves too much to cope with, and the plant dies.

Some plants are more at risk of transplant shock than others. This is often related to the nature of their root system.

Trees that have shallow, far-reaching root systems have a lot of trouble surviving a transplant.

This type of tree is common along bodies of water. Shallow roots resist root rot better.

Examples of shallow-root trees that are difficult to transplant include katsura and weeping willow.

A study was conducted on young birch saplings that were transplanted and sugar water. Dousing the soil and watering with sweetened water significantly reduced mortality and transplant shock. Why not try it out for your own shrub transplants? Add a cup and a fourth of sugar to one gallon of water (10 oz per gallon or 70g per liter). Mix well and use for watering for the first season.